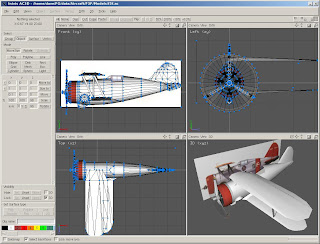 This airplane is visually interesting, but I think it'll be underpowered and visibility will be poor. Carrier landings might be a bear. The model is based on a Paul Clawson F3F for FS98. The original was a bit too low-poly for today's technology, so I'm replacing everything piece by piece, using the original as a scaffold. Gear retraction is going to be interesting too!
Posted by Dave Culp at 9:57 AM 3 comments: 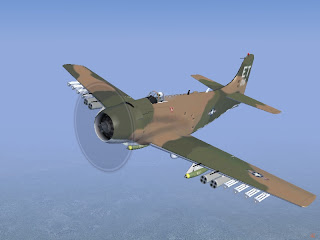 Trying to decide on an ordnance load for the A-1H Skyraider, USAF version. Here is an interesting website on typical loads for an A-1. The CBU-25 looked interesting, so I made some of these bomblet dispensers from circa 1970. We don't have CBU yet in FlightGear, AFAIK, so the submodels for it should be interesting. And we don't have troops as targets yet, so the CBU may not be very useful.
Posted by Dave Culp at 8:22 PM 2 comments:

Modeling tip here. Spinning wheels in FlightGear use the "spin" animation, which is looking for an input using the units "rpm", or rotations per minute. I base the input on a property available in JSBSim called "fdm/jsbsim/gear/unit[n]/wheel-speed-fps". Be sure to change the "n" in the property name to match the number of your gear unit, as defined in the FDM configuration. For most of my models unit 0 is the nose gear, unit 1 is the left main, and unit 2 is the right main, but you should check the FDM config to make sure.

So, how many rpm's does a wheel of diameter "D" (in meters) spin at when moving at "wheel-speed-fps"? I use (5.82 / D). I'm going through all my models now and changing this because I had previously guessed that the spin animation units were degrees/sec, but I was wrong.

BTW, using separate speeds for each wheel allows them to spin realistically in a turn. Zoom in on one of the models in the hangar while it's in a tight turn on the ground, and you'll see the inside main wheel turning at a slower speed than the outside main wheel.
Posted by Dave Culp at 11:19 AM No comments:

Fixed a bug in the Mk-81 XML's. Reduced LOD range for bombs to 2 kilometers. Indentation cleanup.
Posted by Dave Culp at 9:23 AM No comments:

NicQ has added some fixes to the DavePack bombs and rockets. This should make them behave better. New version is 3.9.
Posted by Dave Culp at 5:42 PM 2 comments:

I've been working with NicQ on sound files for the piston engined airplanes, and we've found out some interesting things about the way OpenAL handles sound pitch. First, the API wants octaves as a pitch input, with "1" representing the unmodified sound file. Therefore, a pitch input of 0.5 means one octave lower, and a pitch input of 2.0 means one octave higher. That means that the pitch value needs to be: log2(input/ref) + 1.0, where "ref" is a reference value associated with the pitch of the unmodified sound file, and "input" is a flightgear property value to be compared with "ref". For example, if you have a sound file which represents the engine sound at 1000 rpm, then "ref" is 1000, and "input" is the property "engines/engine[n]/rpm".

One other thing, OpenAL appears to limit the pitch modification to +/- one octave. This means that to create sound for an rpm range of 500-3000 you would need two sounds to cover the range.
Posted by Dave Culp at 4:44 PM 1 comment:

As part of my effort to get the large piston engines sounding right I've added some new sound files to DavePack. These files are non GPL-able, so I've given DavePack a "Freeware, non-commercial" license now. I also included some pilot models in the last version of DavePack which are non GPL-able, so I'm a bit late with the license change.
Posted by Dave Culp at 6:27 AM 1 comment:

FlightGear user "eRobo" is working on a new MiG-21 model. If seen it, taken it for a test drive, and can say it's a great model! The MiG's in my hangar are based on some older, low-poly models from AlphaSim, and there's only so much that can be done with them. eRobo plans to hangar the MiG at FG CVS.
Posted by Dave Culp at 6:21 AM No comments: 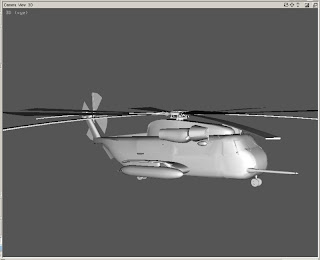 Someone on MP today asked where he could find a CH-53 model. I looked around and found one at simviation.com that would make a great project. Anyone looking for a project? I won't be working it, mainly because I don't know a thing about choppers.
Posted by Dave Culp at 9:13 PM 4 comments:

Does anybody know how the elevon panel deflections on delta airplanes (like F-106 or Mirage III) were mixed? Did the inner and outer elevons move together, or was there some differential there? How much did each panel deflect for roll and pitch?

I just guessed for the Mirage model, and could do the same for the F-106, but I'd rather get this right if I can.
Posted by Dave Culp at 9:42 AM 3 comments:

The Sea Fury model is updated. It's in a usable state now, but still needs a lot of detail work.

DavePack now has an Air Force and a Navy pilot figure, both untextured at the moment. There is also a regular gear indicator (three green lights) and a navalized indicator (with additional holdback and hook lights).
Posted by Dave Culp at 6:51 PM No comments:

I worked on some old models today. These are two of the older one's I have. The T-38 is very low-poly, and I wouldn't bother doing a conversion on it today, but it filled a niche when I first built it, and it looks good enough to keep around. Note: this is the only model in my hangar that uses the JSBSim capability to model a modulating afterburner. The first half of the throttle range maps "mil power" from idle to 100%, and the second half of the range maps the afterburning range. This might be the preferred method for you depending on your throttle hardware.

The Sea Fury is one of the first Alpha Simulations conversions I did. I put it aside a couple years ago, and it hasn't been kept up, until now. It's posted at the hangar as a project, and I'll be bringing it up to par with the other airplanes.
Posted by Dave Culp at 6:12 PM No comments:

I just downloaded Robert Leda's python-based launcher app called fgo. It's fun to play with, and looks more lightweight than fgrun. It can be found here. Note: you'll need the PIL (Python Image Library), as well as a fairly modern version of python.
Posted by Dave Culp at 9:26 PM No comments:

User "someguy" discovered a bug in the new drag 'chute system, so I've put in a fix (I hope) to the F-4E model, which is now posted at the hangar as version 2.6. If all tests properly the new system will:

1) make chute animation visible over multiplayer
2) cause the 'chute to rip off if deployed above 200 kts.
Posted by Dave Culp at 6:37 PM 3 comments:

A note on fuel tank priority

One limitation on the use of the "priority
Posted by Dave Culp at 5:56 AM 1 comment:

The F-4E is now set up so that the drag 'chute should be visible over multiplayer. As soon as I get a chance to test this online with someone I'll add this to all the models with drag 'chutes.

I also switched the weapons release key from 'space' to 'e'. While testing this I saw that some of the bombs appeared to impact each other after being released. I'd rather not increase the bomb release interval in an attempt to fix this, so we may be stuck with this for a while.

User "jano" found a bug in DavePack, another leading slash bug, so I've fixed that. I also fixed the wingtip vortices so they stop emitting when the airplane is crashed. In this case "crashed" means the JSBSim system called crash-detect has detected a crash.

I've also tried to standardize the usage of generic multiplayer properties in my models. Here's what I have so far:

Soon I hope to have all the models meet this standard.
Posted by Dave Culp at 4:35 PM No comments:

I made a recent change to the turbine code that allows you to abort a start properly. With this change the default FlightGear key binding for the 's' key won't work for turbine engines. I'll be adding a new binding definition for the 's' key to all my turbine-powered models. The new binding is a simple toggle, which sets the starter valve to true (open) or false (closed).
The procedure for starting the turbines is: 1) make sure the cutoff property is true (it should be by default), 2) set the starter property to true, 3) when N2 reaches at least 15% place the cutoff property to false. The turbine will accelerate to idle and the starter will automatically set itself to false.
Posted by Dave Culp at 6:11 PM No comments: