Yet more DavePack and Skyraider updates 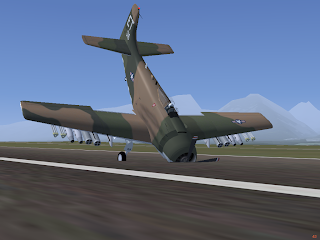 DavePack now has a slip indicator instrument, which the Skyraider really needs now that I've tweaked the P factor and spiral slipstream up a bit. I also changed the armament, adding SUU-11 minigun pods (4) in place of some CBU-25. I also removed the centerline Mk-82 bomb to save some weight.

For takeoff remember to release the parking brake. Advance power to full. The airplane will track straight until about 80 knots, at which time it will need some right rudder. At about 130 knots you'll break ground, at which time you'll need to add some right aileron as the left wing dips. Climb at 160 knots.

For landing, lower wheels when below 200 knots, and lower flaps when below 130. Fly final at at least 110 knots. Cut power over the threshold to land at about 90 knots. Don't stand on the brakes, or you'll end up in the position depicted above.
Posted by Dave Culp at 10:19 PM 1 comment:

I've added a parking brake light to DavePack, which all the models will eventually have. It's especially important for the tail dragger airplanes, since they'll flip over on their nose easily if you try to take off with the brake set.

The new DavePack and A-1H are posted, both meant for FG2.2, although they might still work with FG2.0 (I don't know, and won't be testing for it).
Posted by Dave Culp at 10:36 AM No comments:

I'm running FlightGear code from about mid-December, which is probably close enough to the upcoming 2.2 release to start building for 2.2. The B-17F project now has two versions, one for FG2.0, which I will no longer be working on, and one for FG2.2, which will continue to be developed. Eventually I'll have FG2.2 versions posted for all models.
Posted by Dave Culp at 1:12 PM No comments: